After leaving the monumental Catedral de Sevilla, we continued our tour of the city with a visit to another magnificent complex – Real Alcázar de Sevilla, a stunning palace that will stay in my memory as the most beautiful place I have visited during our trip to Andalucia. 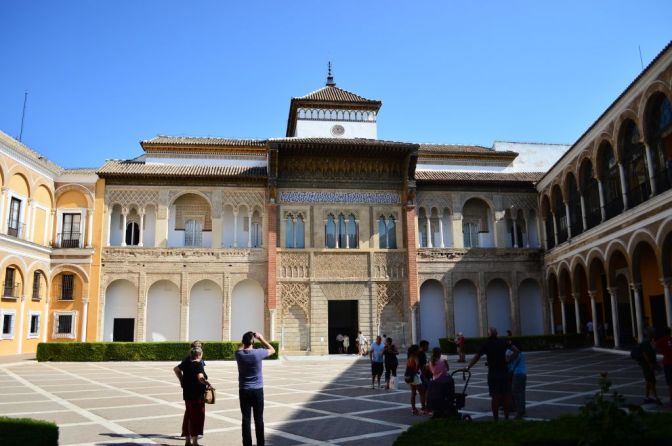 The Alcázar is considered to be one of the most outstanding examples of the mudéjar architecture found on the Iberian Peninsula. It is a registered UNESCO World Heritage Site and the oldest royal palace still in use in Europe, since its upper floors are still today used by the royal family as their official residence in Sevilla. 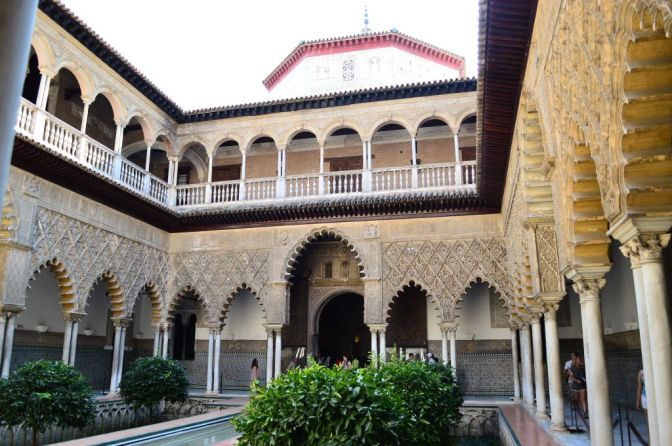 The complex was originally founded as a fort in the 10th century and has since been expanded and reconstructed many times. The first to build a palace on the site were the Almohad rulers in the 11th century, and afterwards, Christian monarch used it as their main residence. “It is one of the most representative monumental compounds in the city, the country and the Mediterranean culture. Its influences held within its walls and gardens began in the Arabic period and continued into the late Middle Ages Mudéjar period right through to the Renaissance, the Baroque era, and the 19th century. Subsequent monarchs have made their own additions to the Alcázar.” (Wikipedia)

From the moment we entered the palace complex hidden behind high walls, it felt like traveling into a magical world of spectacular rooms, inviting inner courtyards, exotic plants, colorful Andaluz tiles and beautiful decorations. 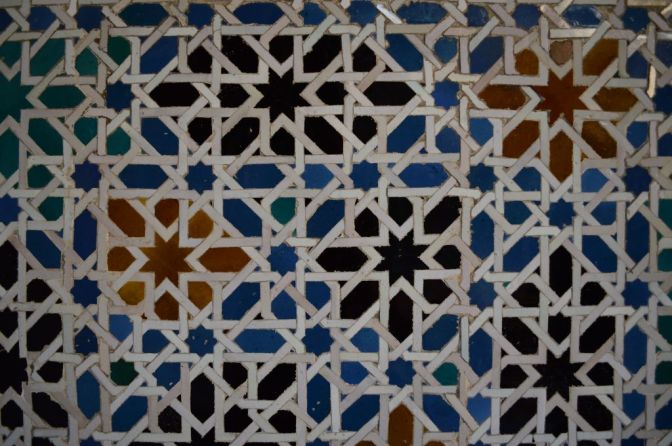 The many rooms of the palace are designed and executed in such intricate details that we had to make sure, more than once, that we were not being tricked by some kind of trompe-l’œil but that those were real architectural elements.

What I found most interesting about the palace interior was how un-interior-like it felt, with walls appearing light and fragile as if made of lace, wide doorways between rooms, decorated windows overlooking hidden patios and the ever-enchanting interplay between the light and shadow.

With the breeze flowing freely through the rooms, the palace seemed very delicate and light, and it felt as if it was not a building but a mysterious, dreamy space somewhere beyond reality. The palace led us deeper and deeper into its mysterious world, with every room being more spectacular than the previous one and every patio appearing more harmonic and inviting than the one before. 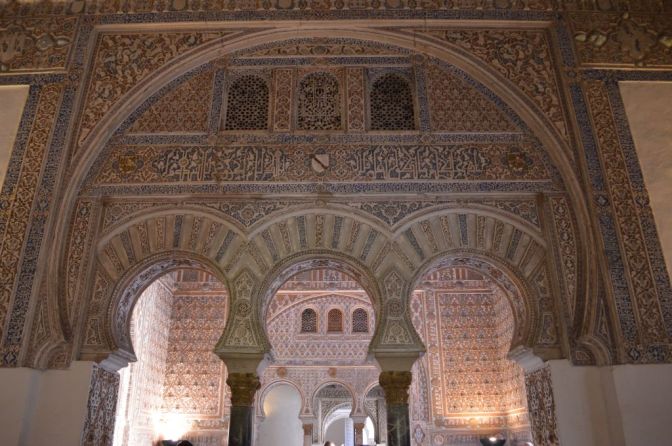 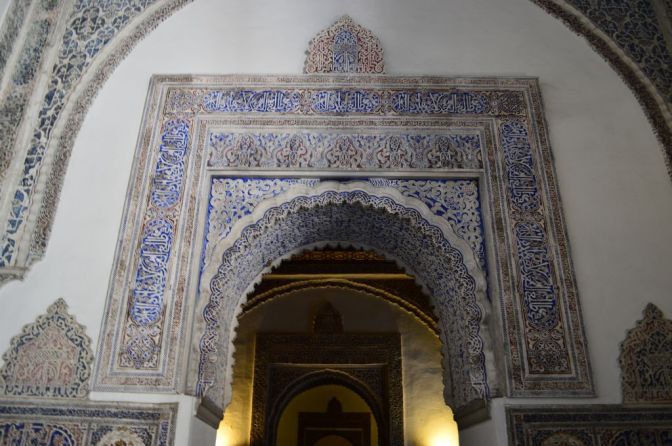 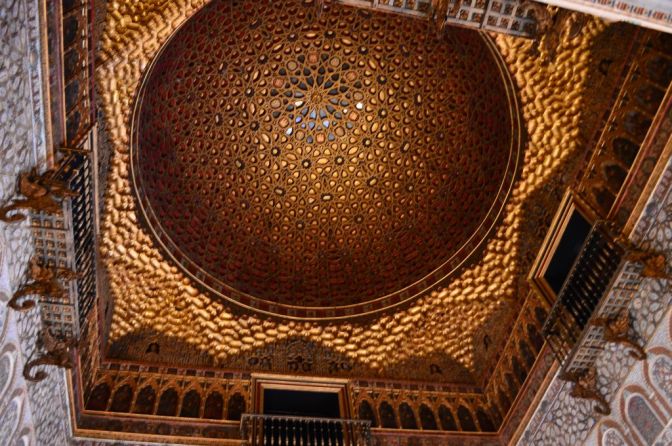 I was already deeply in love with the Alcázar even before we left the magical world of colorful decorative tiles, patterns and lace-like walls and entered the palace gardens. All palaces of Al Andalus paid special attention to their gardens with fruit trees, horticultural produce and fragrant flowers. Apart from supplying food for the residents of the palace, they also had an important aesthetic, even spiritual function. As the palace itself, the Alcázar  gardens went through a lot of changes through history, among those interventions made in the Mannerist style. 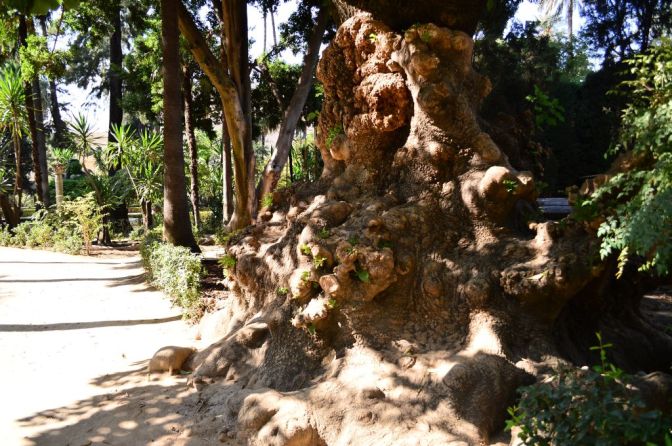 We strolled around the gardens in complete awe, delighted every time we discovered a secluded hidden garden nook with a fountain or a pool and benches covered with traditional colorful Andaluz tiles.

We walked by proud birds that sauntered confidently around the gardens, unphased by the presence of tourists and visitors, we admired the interplay of water elements and plants, we got lost in a maze made of shrubbery and loved the tall palm trees creating shade under which people were laying in the grass, resting. Different parts of the palace gardens offered different sights, smells, colors and types of atmosphere spanning from lyrical, monumental, romantic to more intimate ones. 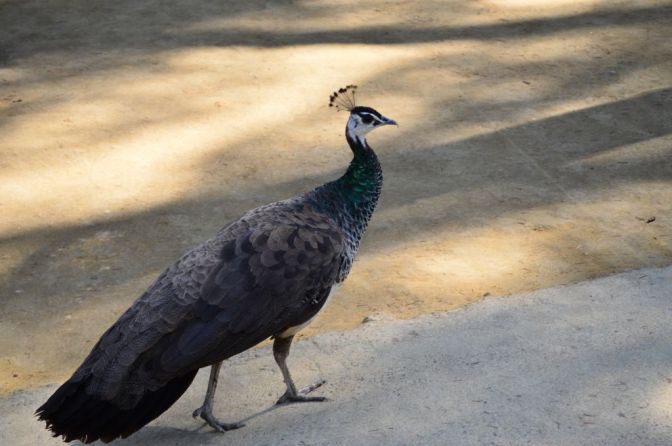 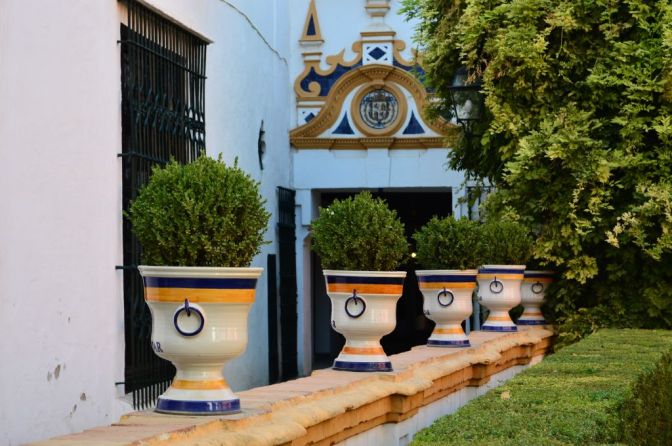 Among all the wonderful experiences we had in Andalucia, and there really were many, Real Alcázar will be one of those to stay in my fondest memory. Somehow, it will always remind me of all beautiful sides of Sevilla, as a place where mystery and grandeur, Christian and Moorish heritage, beautiful nature and bright sun all come together to recreate – in small(er) scale – almost all of the things that make the city so special. 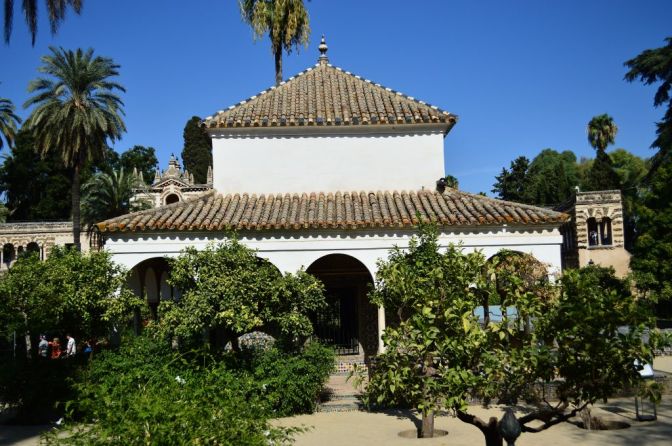