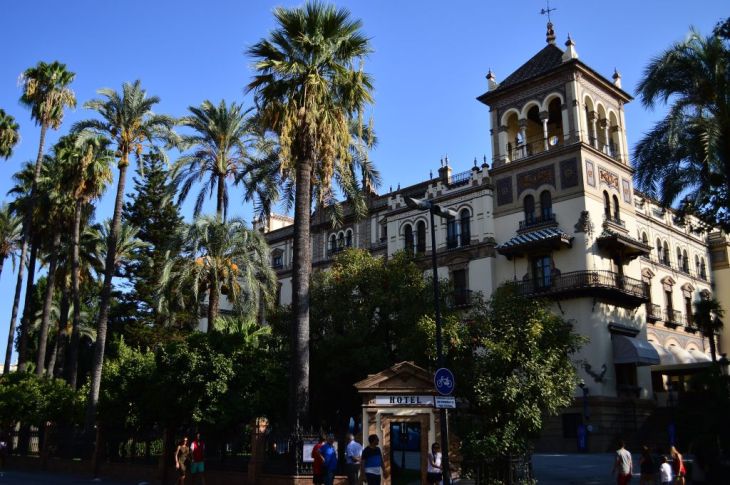 I expected so much from Sevilla – it is one of those towns whose name alone is so laden with expectations and images inspired by literature, music and art that you actually think you know what the city will look, feel, smell and sound like. Finally arriving to the city after years of creating your own ideas about it and realizing – yes, we really are in passionate, romantic Sevilla, the very heart of Andalucia – was immensely exciting.

Exiting the hotel early in the morning after the first night spent in a new city, armed with pocket guides and crisp, unused pull-out maps, fresh from the good night sleep and ready for the introduction to the city and exciting new day ahead, is one of my favorite feelings in the world. As I write this paragraph, I vividly remember leaving the hotel with my family that first morning in Sevilla, happy because all the previous steps of our trip to Andalucia happened as planned, from the flight from Italy, renting a car in Valencia, a long drive through the vast, strangely hued landscape of southern Spain, to arriving to Sevilla, locating our hotel and settling down tiredly but happily in our rooms. As we exited the hotel, I felt the early morning sun on my skin and crisp, fresh air that caught me by surprise as I expected the dry heat of early September to last from dusk till dawn in this part of the country. We were finding our way around the neighborhood while the city around us was slowly waking up and rather than dramatic and grand, our first impression of Sevilla was warm, uncomplicated and hospitable. We instantly felt at home.

The first stop on our touristic route of the city was Metropol Parasol, a wooden structure located over La Encarnación square. Completed in 2011 following the design of a German architect Jürgen Mayer, with its dimensions and height of 26 meters, it claims to be the largest wooden structure in the world. Because of its interesting shape, the structure is popularly known as Las Setas (mushrooms) de la Encarnación, and that shape was said to be inspired by the vaults of the Cathedral of Sevilla and the ficus trees in the nearby square, Plaza de Cristo de Burgos.

As we climbed the terraces of Las Setas, the first aerial view of Sevilla opened up in front of us. This was the first time we saw how big the city is, with interesting buildings, a network of streets and roads and landmarks stretching in all directions, and the walk around the beehive-like, winding terraces of the intricate structure was an experience in itself.

Our next stop of the day was the monumental cathedral of Sevilla, Catedral de Santa María de la Sede. What a fascinating sight it was to first lay sight on the largest Gothic cathedral, the third largest church and the largest cathedral in the world, appearing less like a building and more like a walled town-within-a-town. 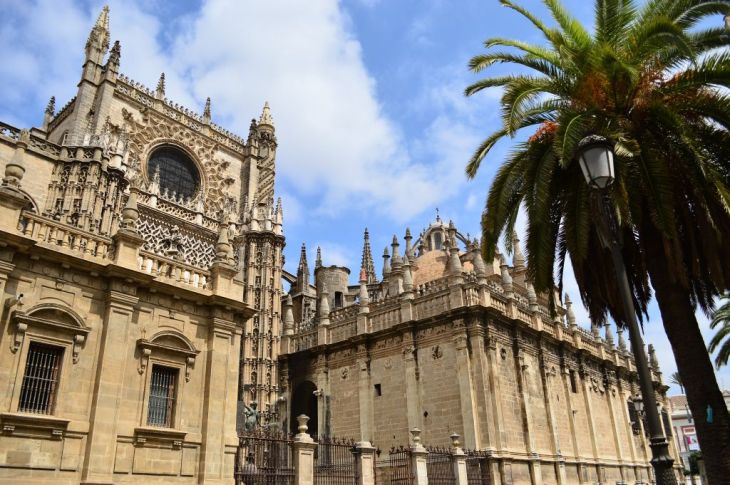 The cathedral was built with the purpose to demonstrate the power and wealth of Sevilla after the city became an important trading center in the 13th century due to the Reconquista. The decision to build the new cathedral was made in 1401, with an ambitious idea verbalized, according to local oral tradition, by a cathedral chapter who said:

“Hagamos una Iglesia tan hermosa y tan grandiosa que los que la vieren labrada nos tengan por locos” (“Let us build a church so beautiful and so grand that those who see it finished will think we are mad”). 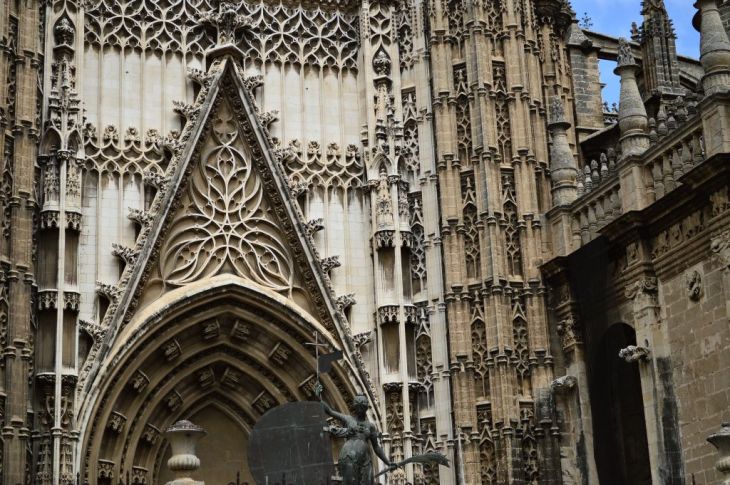 The cathedral was built at the site of a Moorish mosque and the builders used columns and other elements from the previous building, including its minaret which was converted into La Giralda bell tower. The building was completed in 1517, but the work on the interior continued until the early 20th century. 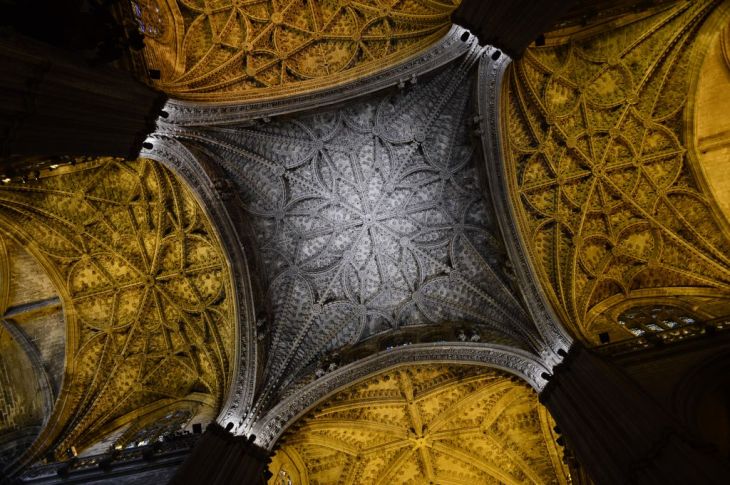 The most spectacular part of the interior is Retablo Mayor, a golden altarpiece designed by a Flemish artist Pierre Dancart, who worked on it for an unbelievable period of 44 years. Retablo Mayor is one of the largest altarpieces in the world and its reliefs depict scenes from the Old Testament and lives of saints. 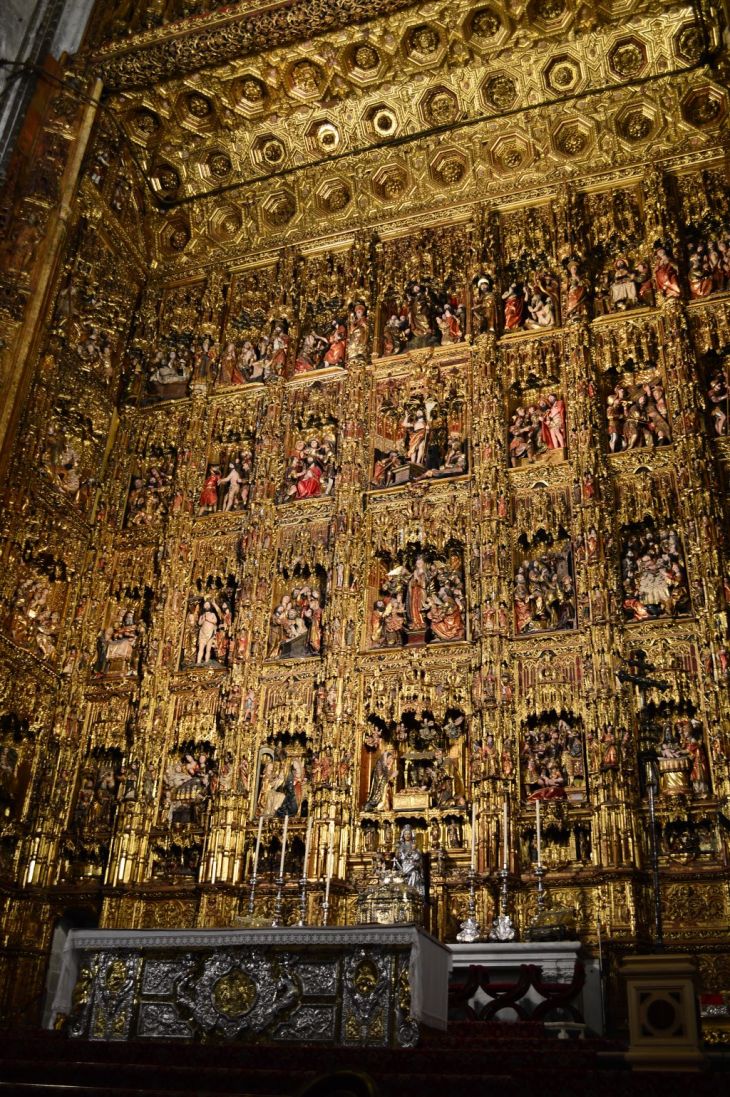 Near the main entrance to the cathedral stands the tomb of Christopher Columbus which supposedly contains the body of the famous explorer. The elegant and solemn sarcophagus of Columbus is carried by four large statues representing the kingdoms of Aragón, Castille, León and Navarra. 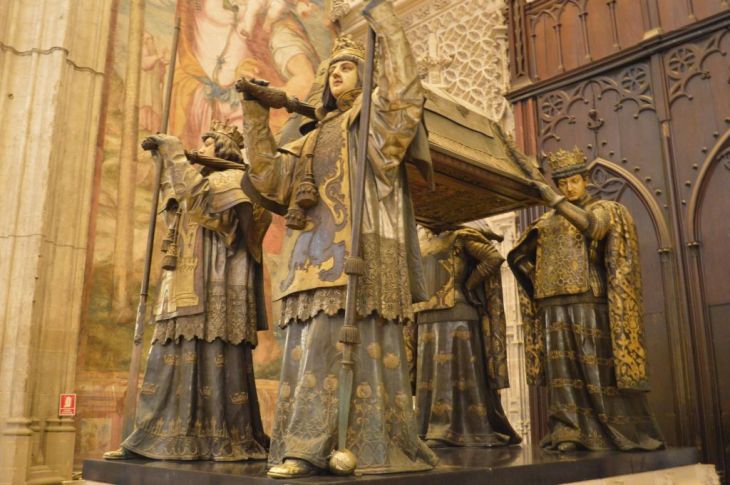 Among the many awe-inspiring parts of the cathedral complex, its courtyard is the one that left the biggest impression on me, with its simplicity, openness and the offer of well-sought and well-needed rest for pilgrims and tourists. As opposed to the interior of the cathedral, the courtyard didn’t make us feel frightfully small, vulnerable and insignificant, but safe and welcome. Whether in a walk around the Patio de los Naranjos, originally the courtyard of the former mosque or in a rest in the shade, close to one of the fountains, the courtyard presented us with many intimate spots for contemplation, gathering thoughts and rest. 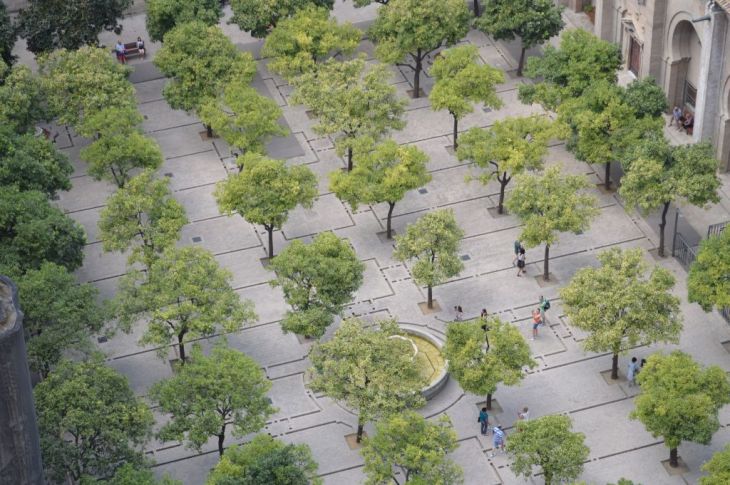 Perhaps the most famous part of the cathedral complex is La Giralda. Originally built as a minaret of the mosque that stood on the site under the Muslim rule, it was converted into a bell tower for the cathedral after the Reconquista. Its height is a little less than 105 meters and it has been, ever since the medieval times, one of the most important symbols of the city.

The climb to the top of the tower is on the must-do list of every tourist visiting the city. There are no steps, but a ramp consisting of 35 segments (wide enough to allow the person riding a horse to climb the tower, a remnant of its Moorish heritage), so the feat seemed fairly easy at first. However, the height of the tower and the scale of the achievement that is to climb it (or get back down from it, for that matter) soon became painfully apparent through the dizziness and the numb pain in our knees and back felt as we were going up in circles. It was all worth it, though, as, after getting to the top, we were given a gift of another aerial view of sunny Seville. From the very heart of the city, we enjoyed the light, refreshing breeze and observed the beautiful city, bathed in sun, spreading around us in all directions. 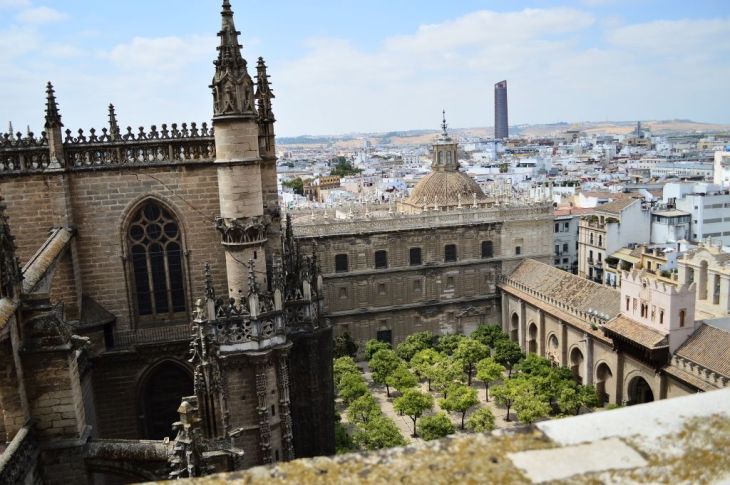