Bullfighting is one of Sevilla’s (and Spain’s in general) oldest and most important traditions. Although I consider this „sport“ completely unacceptable and cruel, we were in the heart of the Spanish bullfighting tradition so we could not miss the chance to visit the  Plaza de toros de la Real Maestranza de Caballería de Sevilla, the oldest and one of the finest rings in Spain and the world. Proof enough of its significance is the grand name that it goes by, „Catedral del Toreo“. 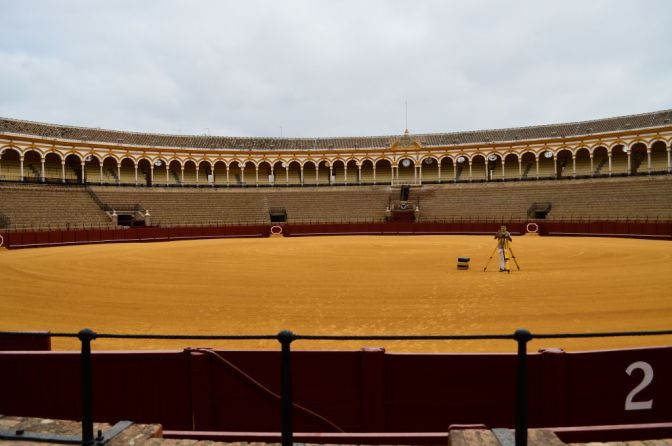 Construction of the bullring that can accommodate around 14,000 people began in 1749 and was completed in 1881. It was in this ring, alongside the one in Ronda, where bullfighting on foot began in the 18th century, and it is consider to be one of the world’s most challenging environments because of its history, characteristics and the unforgiving public. The regular bullfighting season in Sevilla lasts from March or April until late September, with some 20 fights taking place every year, and you can learn about them by taking the organized tour of the ring and the adjoining Museum.

Our visit was an extremely interesting, almost spiritual experience. We were led by a lovely guide who gave her best to answer all our questions about the sport, keen on helping us realize that, despite its brutality and unfairness, bullfighting is inextricably ingrained in the tradition, culture and heritage of the area. She tried to show us that, for the people of Sevilla and Andalucia, bullfighting is so much more than „just a sport“, as she talked about some of the highlights of the Museum’s collection of sculptures, paintings, costumes, posters and equipment that trace the sport’s history from the 18th century to present day. 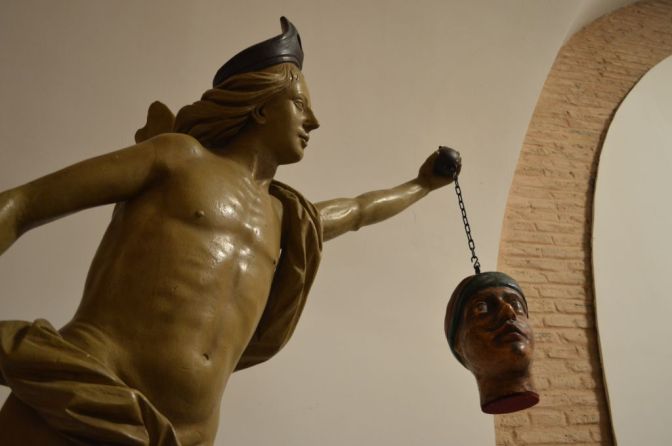 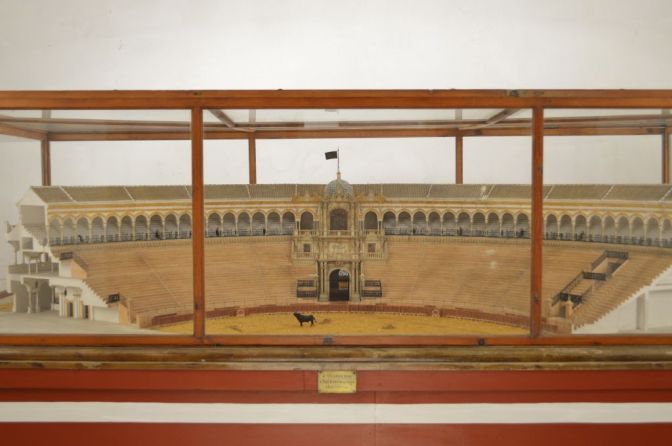 While some descriptions of the bullfighting rules and rituals were literally heartbreaking and I found it difficult to understand or justify things that happen in the arena year after year, the guide tried to give us a different perspective on the matter and shared with us stories of celebrated bulls and toreros of Sevilla such as Juan Belmonte and Joselito El Gallo. It was all extremely insightful and I would strongly recommend the visit to the Museum to anyone even remotely interested in the Spanish bullfighting tradition. 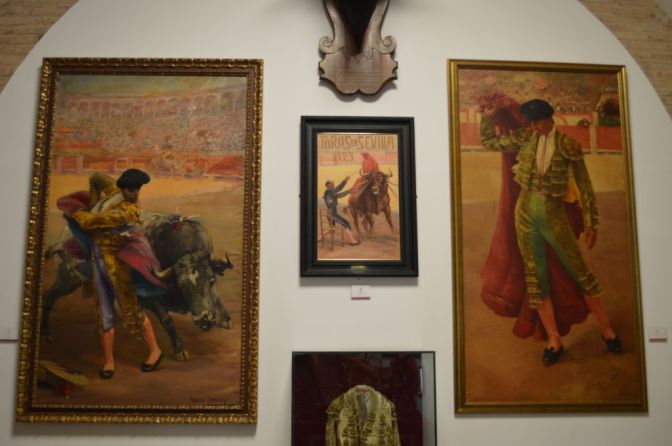 As a part of the guided tour, we naturally visited the arena itself, a visit that caused quite stirring, opposing emotions – from resentment and disgust upon hearing about the number of animals whose blood is spilled on the yellow sand of  Real Maestranza year after year, to a bizarre sense of awe upon seeing how meticulously kept and maintained the arena is, as if it was an altar, a sacred place. 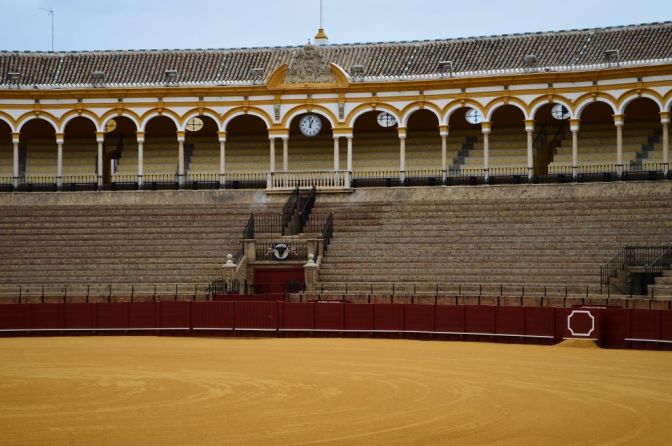 A number of times during the tour bullfighting was elevated, symbolically, to the level of religion – in descriptions of complex and meaning-barren rituals of the fighting, in talking about legendary fighters, with their clothes made of expensive, lavish materials kept in glass boxes as if they were liturgy vestments of cardinals or popes, to tiny bottles containing priceless grains of sand from the ring, sold in the souvenir shop like some sort of relics. 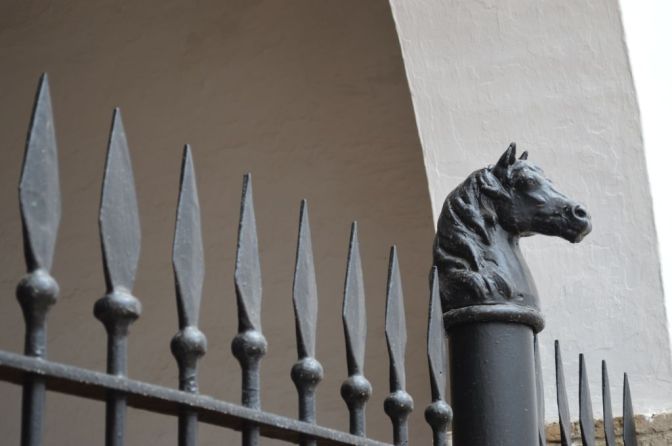 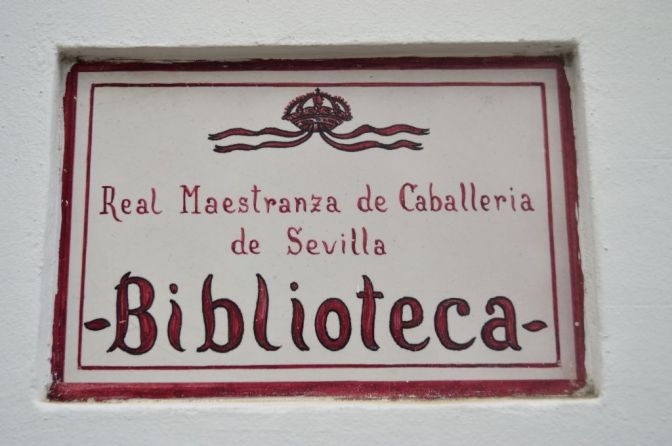 Still heavily under impression, we continued along the sunny streets of Sevilla, trying to shed the conflicting emotions from the visit to Real Maestranza and return to the mode of enjoying the laid-back atmosphere, fantastic weather and splendid architecture of this fascinating, contradicting city. 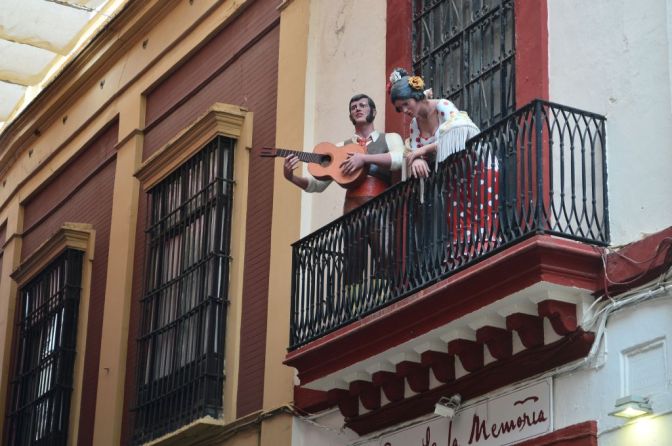