Córdoba was the first town we visited during our trip to Andalucia, but for some reason, it ended up being one of the last ones I’m writing about. I don’t know why: it’s definitely not because the town disappointed us or because of its lack of beauty, for it just might be the loveliest of all Andalucian towns we got the chance to visit during our journey. Córdoba is extremely photogenic, unobtrusive and just plain lovely, a town where beautiful scenes and photo opportunities lie in every single corner. It is more peaceful and introverted than its famous Andalucian neighbors such as Sevilla or Granada, but well worth visiting for its fascinating history and some of the most important and spectacular monuments in the country.

We started our visit to Córdoba with a walk through the town’s Jewish Quarter, Judería, a modest, quiet but historically very significant network of narrow streets edged by clear white walls of surrounding buildings. Sinagoga de Córdoba is in the center of this historic quarter, a building from the 14th century, decorated in the magical, intricate style of Mudejar tradition. 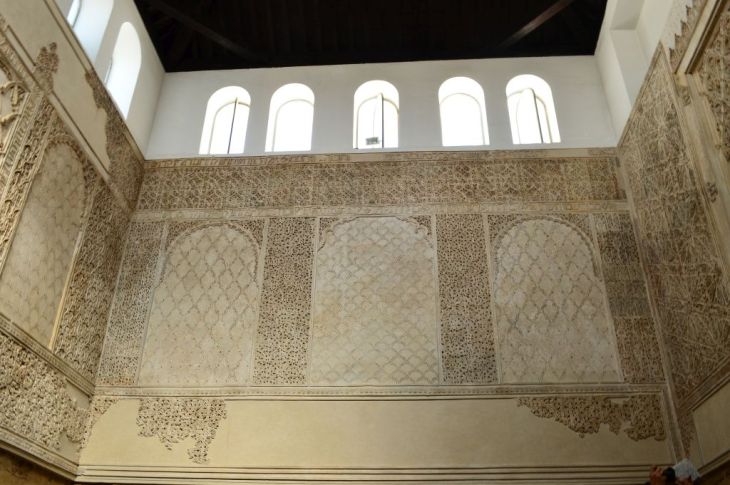 This synagogue is one of only three synagogues in Spain that survived expulsion of the Jews in 1492, aimed at preventing practicing Jews from influencing “New Christians“. The synagogue’s small size sparked some interpretations that it may have been a private synagogue of a wealthy man, but nonetheless it is very interesting in its intricate detailing and specific layout.

Our next stop was the Mezquita, the grand mosque-cathedral of the city, one of the greatest Islamic buildings of all time, one that I learned about in during my Art History study as the supreme example of Moorish architecture and the cultural power that Córdoba historically had. A building that left us speechless.

To better understand the importance and grandeur of Mezquita, a quick historic overview is in order. Córdoba was first a Roman settlement, and was colonized by the Muslims in the 8th century. It became the capital of the Islamic Emirate, and then of the Caliphate of Córdoba which included the most of Iberian Peninsula. This was the golden period of the city, when in its power and culture rivaled cities such as Cairo and Baghdad as a centre of Muslim learning and art. Córdoba was the heart of the Western Islamic Empire, a center of culture and learning, full of libraries, medical schools, universities and other centers of education.

In this context Mezquita was built. In 784, Abd al-Rahman I ordered the construction of the Great Mosque on top of the archaeological remains of the Visigoth basilica. The building was subsequently further expanded and made more grand by other Muslim rulers. In the 13th century, during the period of the Reconquista, Córdoba returned to the Christian rule, but the building was not neglected. Rather, it was converted to a Roman Catholic church and further expanded with the addition of a Renaissance cathedral nave in the 16th century.

The best known part of the building is the arcaded hypostyle hall consisting of 856 columns made of precious materials such as jasper, onyx, marble, granite and porphyry. 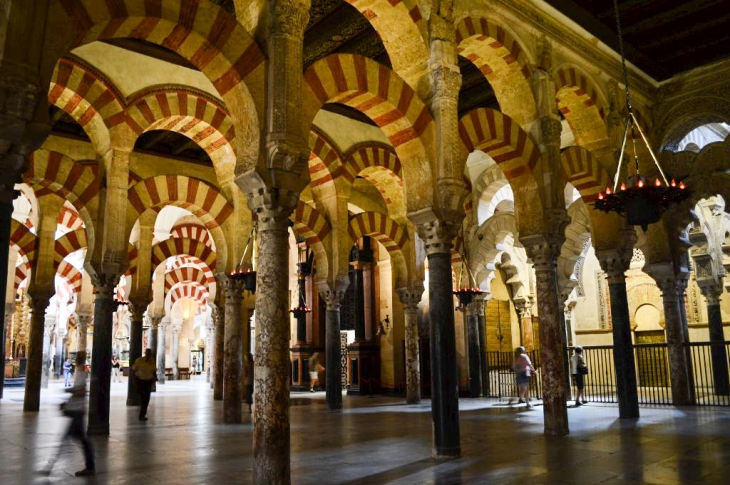 This building brought innovation to the history of architecture with its system of double arches. Placing an upper semi-circular arch onto a lower horshoe arc enabled the builders to make higher ceilings with lower columns: since many of the columns in Mezquita were taken from different buildings from all parts of the Roman Empire, the pillars were of different sizes, many of them not high enough to reach the height of the ceiling that was intended. For that very practical reason, the double arches were constructed.

Words can hardly describe the feeling we had upon seeing the forest of pillars and columns in the great hall. Despite the crowds, the interior seemed mystical, serene, quiet, a place of true spirituality and serenity, a place where you can find yourself. While the majestic hall evoked awe and wonder, it did not take away from the deeply spiritual atmosphere of the space. Despite many visitors, the arcaded hall offered plenty of private space, where one could stop, contemplate and introspect in the atmospheric, mystical semi-darkness.

After the Reconquista, Christian ruler added layers and elements to the majestic building, the most significant of them being building of the Renaissance cathedral nave in the center of the complex. Building was allowed in the 15th century by Charles V, the king of Castille and Aragon, but he was not pleased when the nave was completed, famously stating: “You have built what you or others might have built anywhere, but you have destroyed something that was unique in the world“. These words rang true after passing from the calm semi-darkness of the Moorish areas onto the bright, monumental nave. Despite its beauty, size and the sumptuous decorations, we could not escape the feeling that this part of the complex seemed much less spiritual than the Islamic parts and that it was, in a way, out of place.

Torre Campanario, the bell tower , is the vertical highlight of Mezquita. Originally built as a minaret in 10th century, it was encased by an outer shell and made higher by the Christians. The original minaret would have looked something like La Giralda in Sevilla, which was built later with obvious influences, just like many other minarets built throughout the western world whose builders were inspired by the tower of Mezquita. 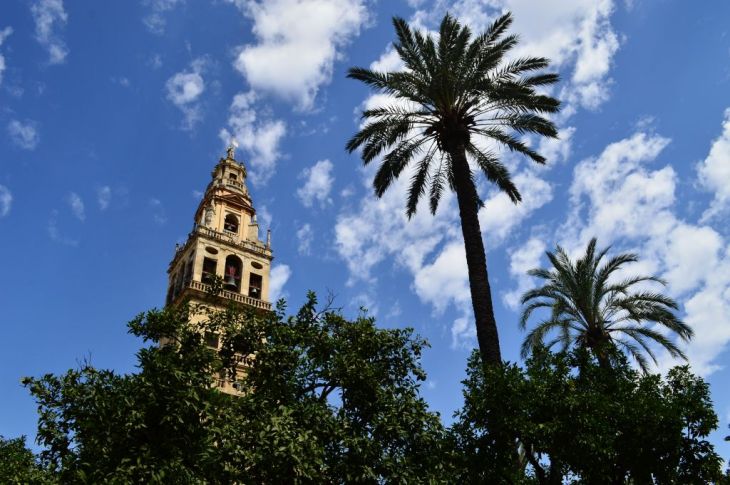 In order to gather our thoughts and impressions of dazzling Mezquita, we took a short walk under the scorching sun and came to Puente Romano, another landmark of the town. It is a Roman bridge spanning Rio Guadalquivir, built during the 1st or 2nd century AD. 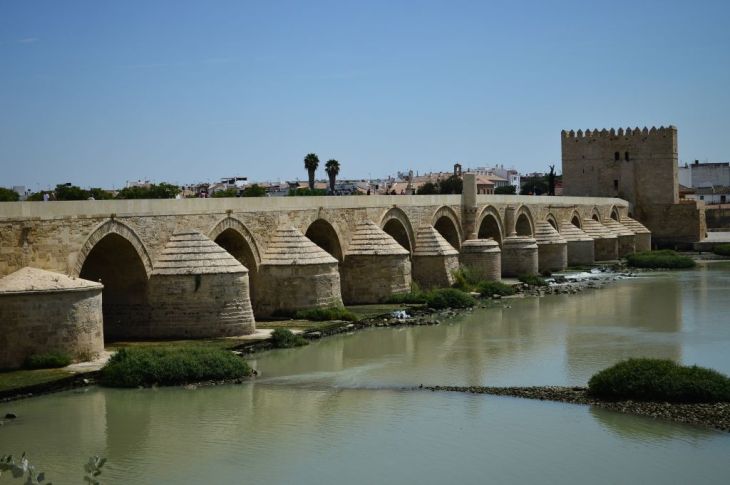 Standing on a bridge above the lazy river, we got the chance to see outlines of the town whose building styles, Moorish heritage, specific hues and calm atmosphere demonstrated that this was a town like no other.

Our tour of Córdoba continued with a visit to Alcazar de Los Reyes Cristianos the medieval castle located in the heart of the city, completed in the 14th century. 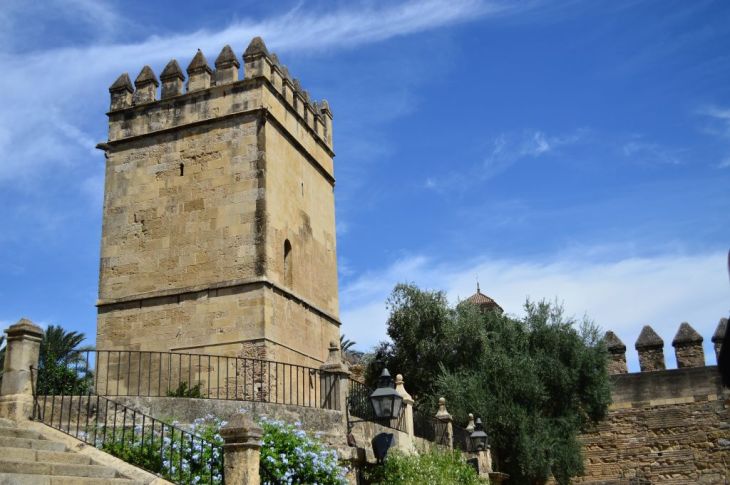 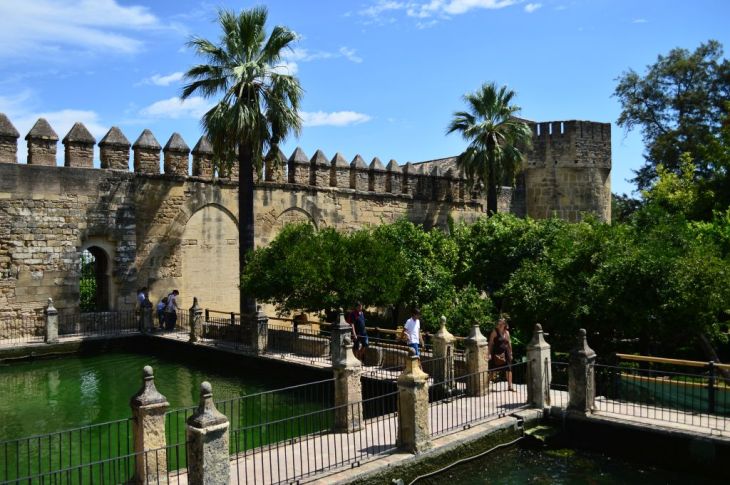 The castle which was the primary residence of Ferdinand and Isabella, Los Reyes Católicos, like so many other buildings in the city has a simple, almost fortress-like exterior which hides a complex of connected rooms and hidden patios. Especially beautiful were its gardens and fountains, areas that offered us a chance to cool down a little and hide from the bright, unforgiving sun of the Southern Spain. 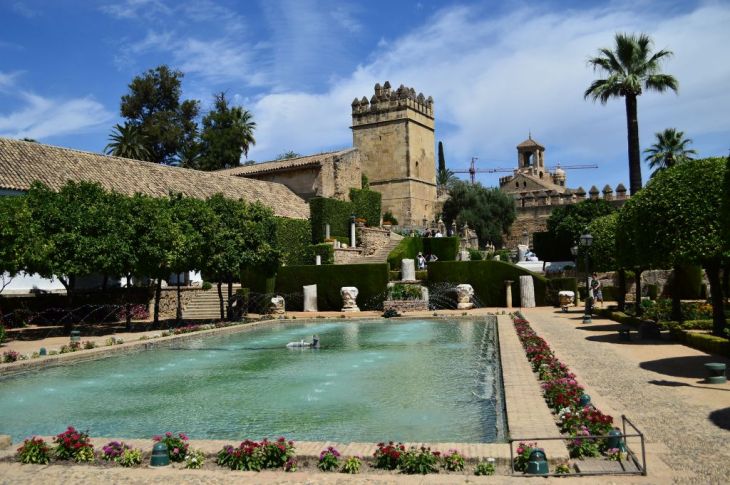 Despite all the historic and cultural wonders that can be found in Córdoba, this is a town that is, perhaps, best known for its streets and hidden patios. It was such a joy to discover and be constantly surprised by hidden picture-perfect places filled with blooming flowers and trees, with charming benches and trickling fountains. One of the most famous such places in Córdoba is Calle de las Flores, a short and narrow street, with walls decorated with flowers and a unique view of the Mezquita Tower. 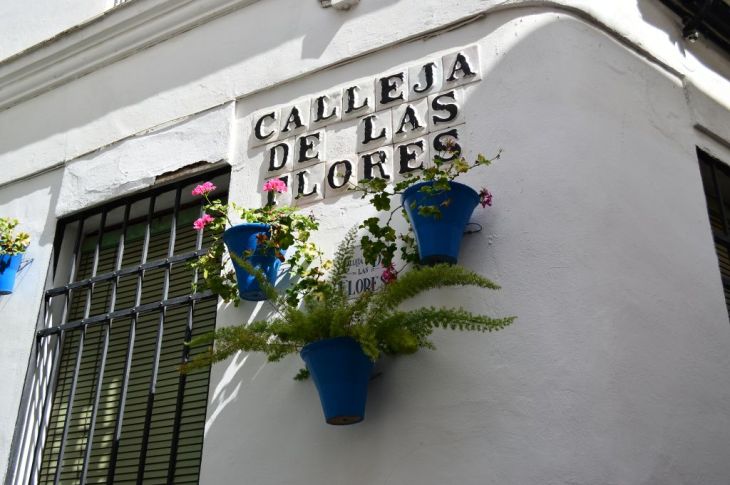 A shy, modest town which does not like to boast, Córdoba is a beautiful place which, for us, served as a perfect introduction to the sunny, rich, historic life of Andalucia. We spent a beautiful day there, leaving with the thought that we could have stayed in the labyrinth of beautiful, exciting, surprising streets, hidden plazas and flower filled patios for much, much longer, getting to know the town which was once the center of the world and is now a friendly, charming gem of  a place, inviting to be discovered, appreciated and loved.