Lisbon is a large city with many attractions that allow you to get to know it, very affordably, in all of its quirks and surprises. For every museum, theater, church or other “typical” sight, there is something fascinating to experience simply by walking around Lisbon’s districts, sitting in its squares and getting lost in its streets. Here is a list of 10 experiences you shouldn’t miss when visiting this wondrous Portuguese capital.

1 – Taking a ride through popular neighborhoods of Lisbon on the famous yellow tram no. 28 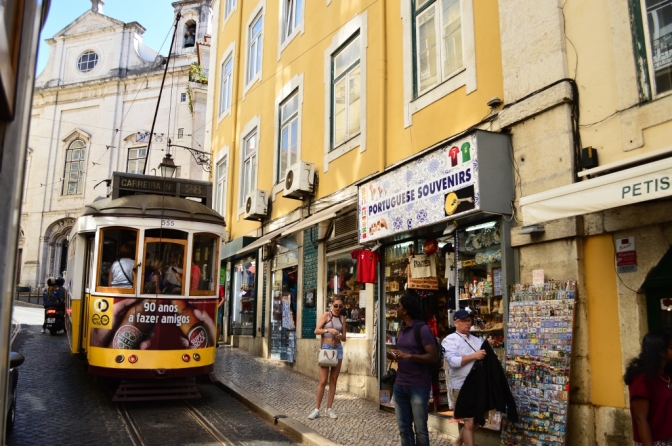 Prepare to stand in line for a while and your patience will be rewarded with a ride around the city in an authentic, wooden tram which will take you through all central Lisbon neighborhoods (Graça, Alfama, Baixa, Chiado, Bairro Alto). During the ride, you will see city’s churches, institutions, squares and miradouros, take a gazillion photos, ride up and down steep hills and pass other colorful trams on incredibly narrow streets. This budget-friendly activity really is a great way to get to know Lisbon, especially if you only just arrived and are still trying to get the grasp of the city’s layout. 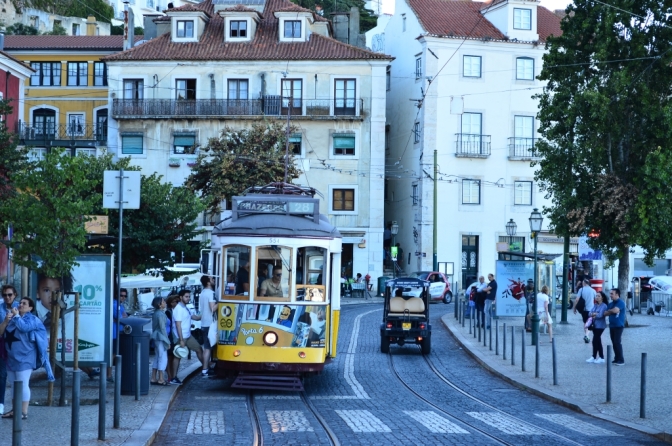 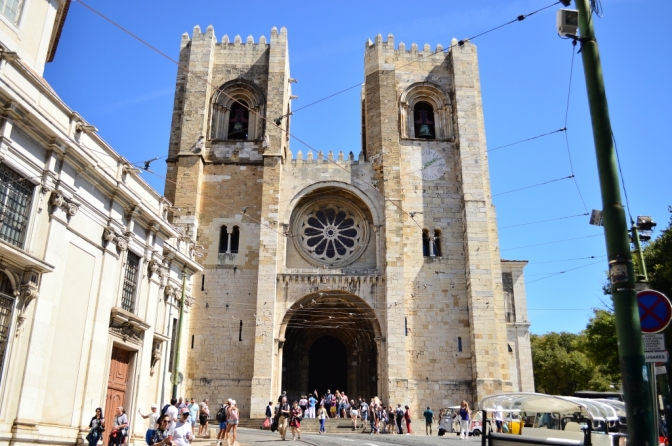 Lisbon’s cathedral is the oldest church in the city. Its building began in the 12th century, on a slope surrounded by a tightly intertwined network of residential buildings. This church is completely embedded into its surroundings, making for a powerful sight. There is a busy little square in front of the fortress-looking cathedral, full of souvenir sellers and wandering tourists. 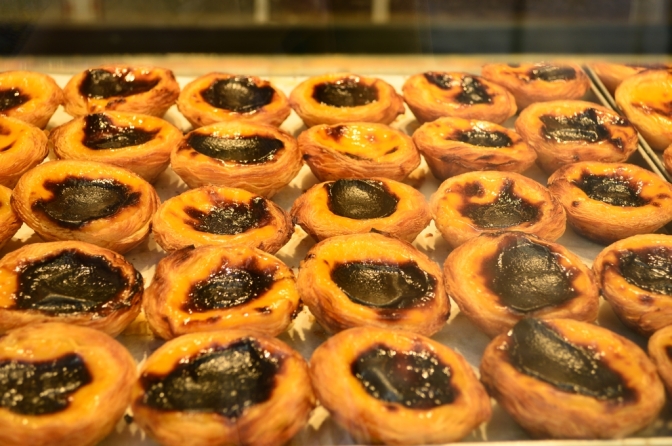 Pastéis de Nata are made of egg custard creme in a puff pastry. This famous Portuguese dessert, often eaten sprinkled with caster sugar or cinnamon, was first created by Catholic monks at Mosteiro dos Jeronimos in Belém. Seeing as these sweets are sold in every cafe or shop in Lisbon, there is no reason why you shouldn’t eat them every day, in any time of day, everywhere. Just don’t succumb to the pressure of needing to try the „best“, „tastiest“, or „the original“ Pastéis in Lisbon, for every one you have, from wherever, will be delicious in its own way. The tastiest Pastel I had in entire Portugal, for example, was the first one I tried after arriving to the country – in a coffee shop adjoining the gas station on the highway between Lisbon and Porto. 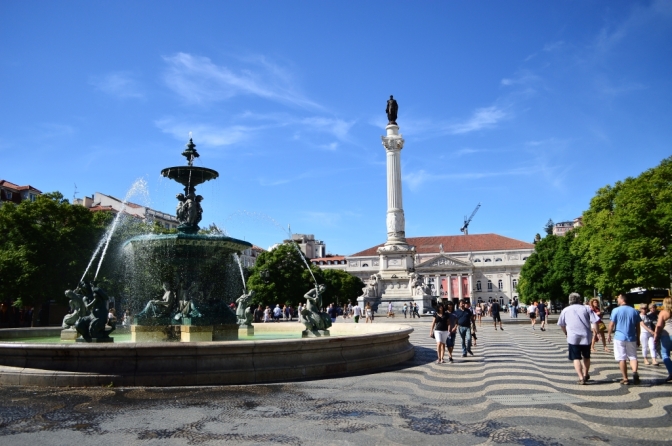 Rossio square is a large, lively square located in the city center. It also bears the name Praça de D. Pedro IV, whose statue can be found on a column in the middle of the square. Historically, this is where celebrations and revolts, bullfights and executions took place, while today it is a great place to people-watch, absorb the lively atmosphere of the square or simply get hypnotized by its wavy black and white pavement pattern dating from the 19th century. 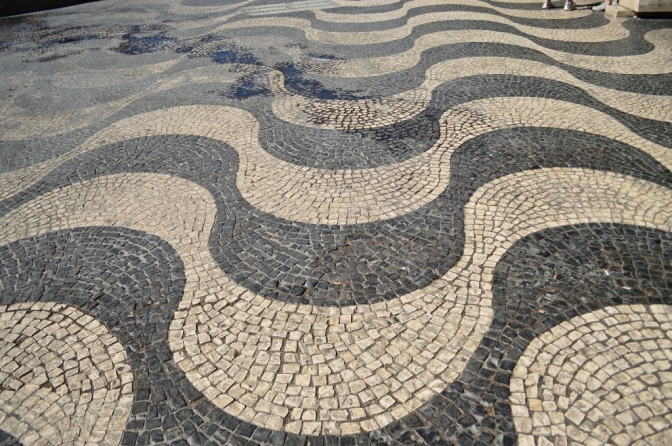 5 – Spending a history-infused day in Belém 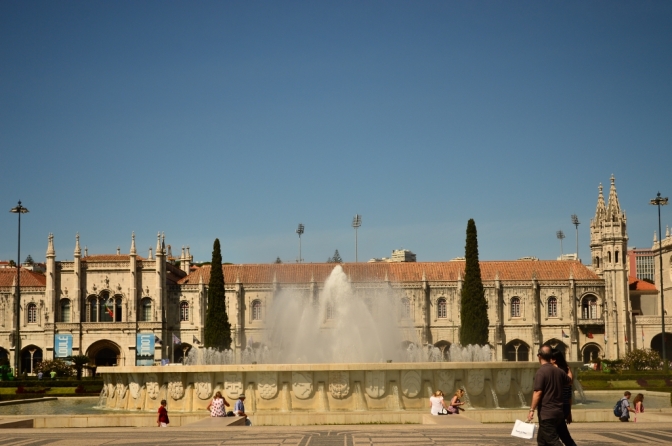 A definite must-do of any trip to Lisabon is spending a day in Belém, the western district of Lisabon where many of the city’s most important attractions can be found. Belém is located at the mouth of the river Tagus and a day spent there is a day in which you are bound to learn much about the long and rich naval history of Portugal, as many of its historic monuments commemorate early Portuguese explorers and the country’s fascinating past. 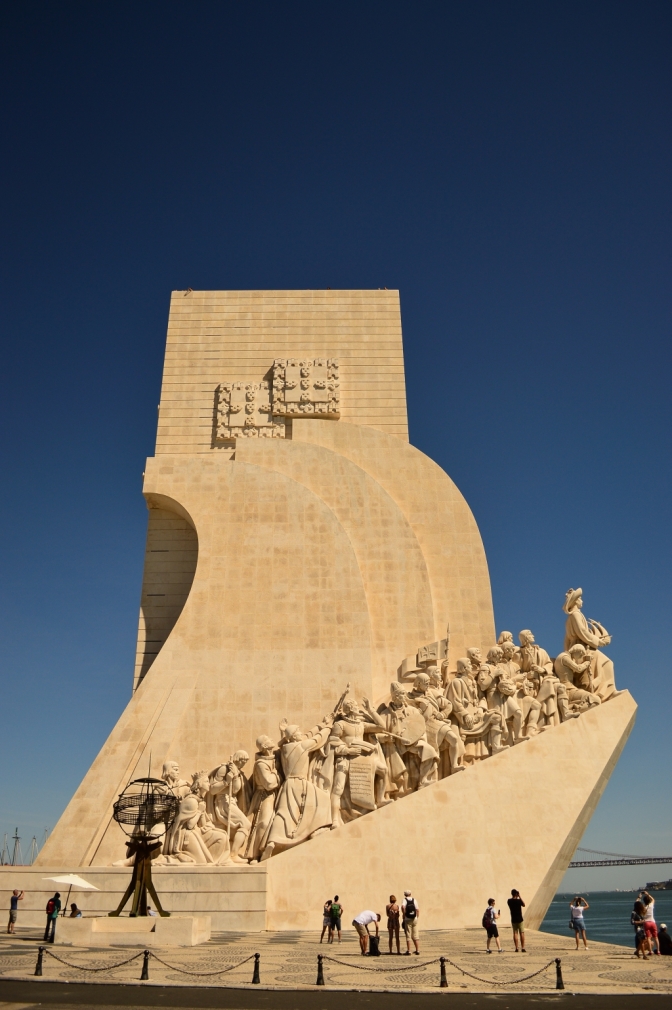 Originally built in 1940 to serve as a centerpiece for the World Fair, its today’s iteration was completed in 1960, right in time to commemorate the 500th anniversary of death of Henry the Navigator. This national hero is the founder of Portugal’s golden age of discoveries in the 15th century, when Portuguese seafarers circumnavigated the globe and began establishing colonies from Brazil to China. For his great contribution to the country’s naval power and wealth, Henry is the primary figure on the monument, somberly and determinedly looking towards the Atlantic Ocean. 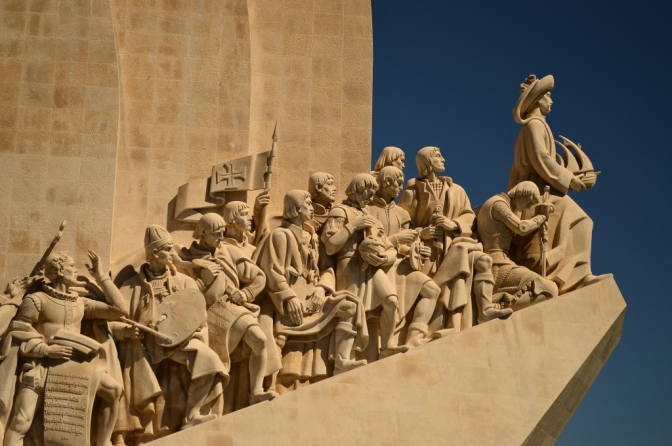 A short walk from Padrao dos Descobrimentos is another icon of the city, Torre de Belém. This richly decorated tower was built in the 16th century as a part of defensive system to protect access to the Tagus estuary. 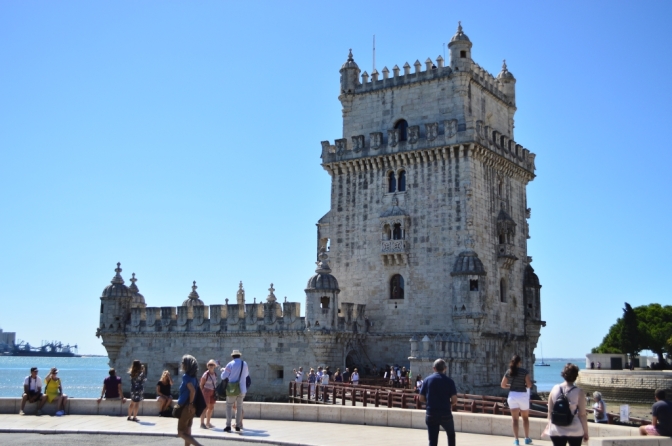 The largest and most monumental attraction in Belém is Mosteiro dos Jeronimos, one of the most decorative buildings in Portugal. This is where Vasco da Gama spent his last night before his travel to the Far East and discovery of India, and the monastery also houses Museu da Marinha in one of its wings, a museum which narrates a fascinating, brave and at times unbelievable story of Portuguese explorations and discoveries. 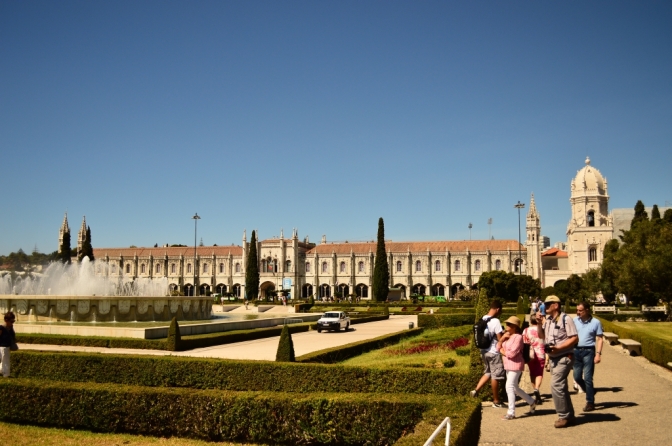 After the educational historic walk around the district, your day in Belém cannot finish without a visit to the famous pastry shop Fábrica de Pasteis de Belém, selling iconic Portuguese sweets. 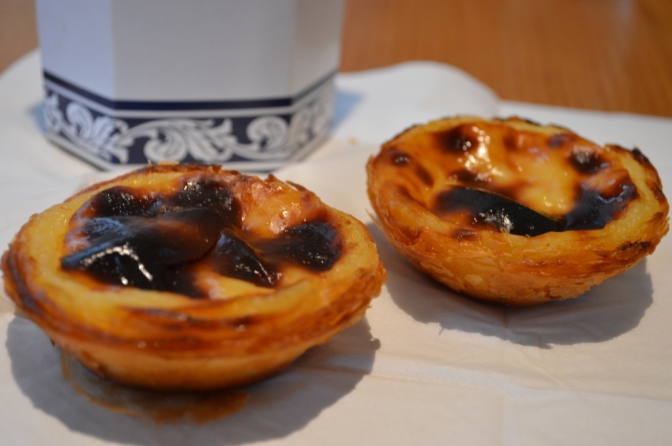 This pastry shop started baking Pastéis de Nata in 1837, following the original recipe from the monks of Mosteiro dos Jeronimos. You might be perplexed with how fast and deft sellers taking your orders and packing the sweets are, juggling professionally with seemingly thousands of Pastéis on a daily basis. If you find a spot in the shop, have your Pastéis there, surrounded with iconic white and blue tiles; if not, don’t worry, you can take them with you, neatly packed in a carton box, and eat them anywhere in Belém – in adjoining cafes, on the streets or in the parks.

I probably shouldn’t state this publicly, but I had my Pastéis from the Fábrica de Pasteis de Belém in a nearby Starbucks. Talk about the clash between “traditional” and “hip”! 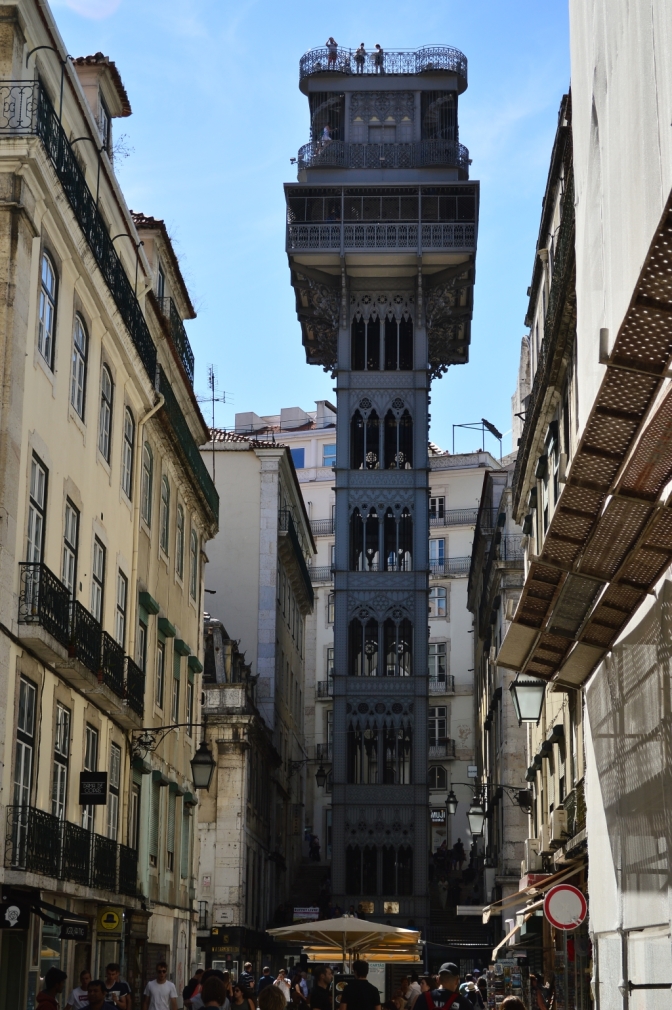 One of the most famous and photogenic sights in Lisbon is an elevator built with a very utilitarian and clear aim – to transport passengers up the hill from Baixa district to Largo do Carmo. Elevador de Santa Justa was built in the 19th century after the design of Raul Mesnier de Ponsard, Gustave Eiffel’s student. At the top of the elevator, there is a viewing platform offering panoramic views over the city, especially beautiful at sunset.

7 – Being hip in Mercado da Ribeira 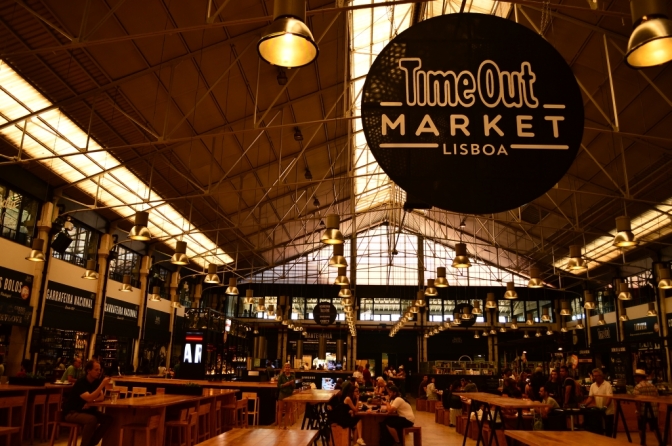 Mercado da Ribeira has been Lisbon’s main food market since 1892. In 2014, it was taken over by Time Out Lisboa magazine which turned it into the hippest market around, catering mostly to tourists, offering traditional produce, different foods and very instagrammable souvenirs. Even though it might lack the gritty soul of old-school markets (if that’s what you’re looking for, traditional stalls selling fresh produce are in the adjoining space), it is a really cool place to find some original souvenirs, have a traditional Portuguese dish with a twist and enjoy the airy, chilled out atmosphere. 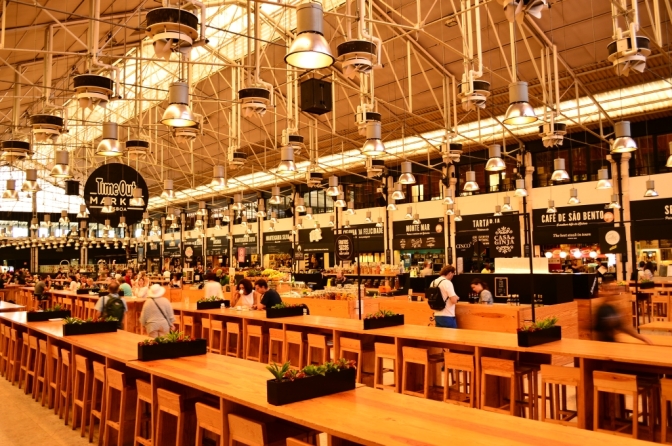 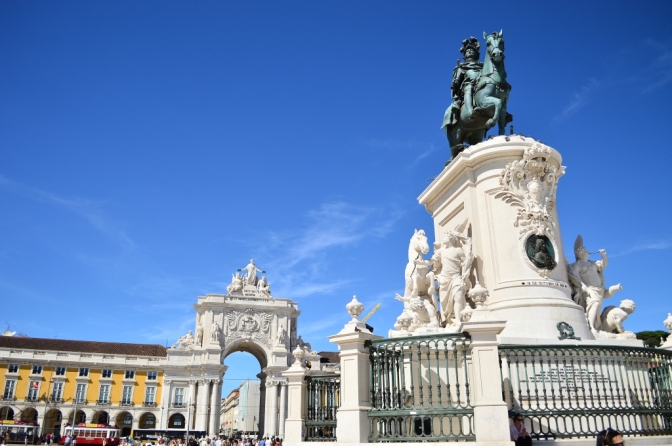 A fascinating thing about Lisbon is that you can’t immediately understand how big it really is, since its hilly layout tricks with its narrow streets and different neighborhoods. Only in certain locations can you really grasp the vastness of this majestic capital: one of such is the huge Praça do Comércio, Lisbon’s main square.

Praça do Comércio is surrounded with traditional buildings with galleries, opening on one side towards the river Tagus. It was built in the second half of the 18th century, after an earthquake destroyed many parts of Lisbon. Highlights of the square include statue of King José in its center and beautiful Arco da Rua Augusta, connecting the square with the busy pedestrian street in its extension. Upon taking notice of all the highlights, one needs only to stand in the center, breath in deeply, and realize once again what a majestic city Lisbon is and what fascinating, rich heritage Portugal and its capital have.

Feira da Ladra is a large flea market held two times a week (on Tuesdays and Saturdays). Located at Campo de Santa Clara in the Alfama neighborhood, very close to the splendid church of Santa Engracia (the National Pantheon), this flea market is as simple and as unpretentious as flea markets go: dozens of stalls (real and improvised) and traders selling everything, from CDs and records to cutlery, knobs, old electronic devices, stamps, books, clothes and anything else you could possibly imagine. At first, the sight of the market might surprise, even shock you, especially when you see items stretched on blankets on the ground, but it won’t take long for you to get into the groove of the place and start exploring everything on offer.

10 – Crossing Ponte 25 de Abril and heading for the beach 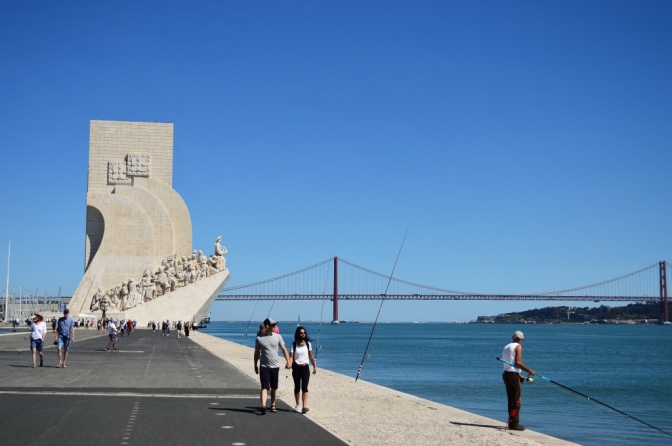 If you want to see the beach, there is no better way than crossing Ponte 25 de Abril into the municipality of Almada and visiting Costa da Caparica, a seaside resort popular among the Lisboans. With its long stretches of sandy beaches, shops selling souvenirs and beachwear and surfers riding the waves, Costa da Caparica is where you can come to replace the bustle of the big city with long, relaxing walks in the sand.

Ponte 25 de Abril is very imposing: similar in appearance to the Golden Gate Bridge in San Francisco, its total length is 2.3 km. Until 1974, it was named Salazar Bridge, and its today’s name commemorates the Carnation Revolution which overthrew Salazar’s regime in Portugal. Some 150,000 cars cross the bridge every day and seeing them blitz around you in several lanes is quite an experience in itself.